Morning Chaos is an alternative metal-rock band from Liege, Belgium. Played at a low tuning, their music combines sharp and groovy guitar riffs with catchy choruses, melodic and raging vocals and an elaborate drums and bass section.

From the dusty Californian desert to the turmoil of the financial crisis, their lyrics encompass multifaceted personal and social scenes of chaos, deceiving love stories and roadside snapshots.

Imagine waking up in the morning and all you see through the window is desolation: if your first reactions could be a soundtrack, that would be close to what the band sounds like. 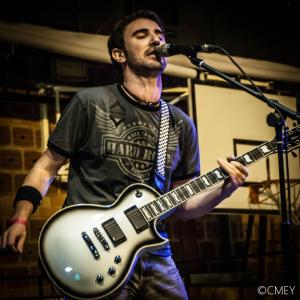 Since he’s 16, Kevin has played in several rock-metal bands as a guitarist and/or a singer, in France (Rennes).

He joins the Morning Chaos project in March 2011 and provides the band with melody-driven vocals, dark poems and powerful guitar riffs. 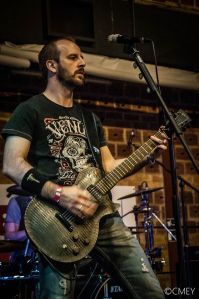 Self-taught since he’s 18 and drawning its different influences on devastating riffs from groove metal to thrash, he joins Morning Chaos in June 2015, after the departure of Niko.

With a massive guitar sound, he naturally completes the rhythmic section of the band, bringing a solid support. 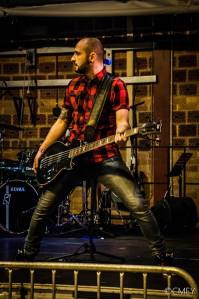 A huge fan of all kinds of metal music and a total stage-lover, Romz plays the bass since he’s 15.

His bass made him explore many musical territories and create non-conventional melodic and rythmic, which he gives away at its fullest within Morning Chaos. 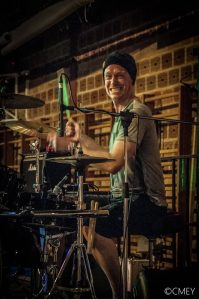 A guitar player since he’s 16 (ex-State of Mind), he decides in 2010 to devote himself to another instrument that’s been attracting him for years: drums.

Self-taught, he learns more and more each day through Morning Chaos’ compositions, trying to find powerful and energetic rhythmics to highlight melodic lines as subtly as possible.

Morning Chaos was created in 2010 by David, an experienced guitarist willing to start out on the drums in a new band, and Roman, an accomplished bass player sharing the same desire to explore new musical horizons. From the start, their aim is crystal clear: playing a punchy and melody-driven metal-rock, with stoner and alternative accents.

The two founders’ rehearsals give birth to first versions of Empty-headed, Scholomance and Off He Goes, that they record and put on line in order to recruit guitar players and a singer seduced by the project. After a few unsuccessful auditions, Kévin joins them in March 2011 as the lead vocalist and guitar player. One month later, Nicolas becomes the last member of the band as a rhythm guitar player. The line-up is complete, Morning Chaos is born! From this moment on, the tempo speeds up: productive rehearsals, motivation, creativity… 10 songs are composed until June 2011 and half of them are selected to be included in the first demo of the band. Recorded in the summer 2011 at David’s, who gives a first try at recording a band through home studio sessions, the mix and mastering is then carried out with the help of Didier Rombauts (ex-Quena Sound Studio). Entitled Soil & Dust, the first studio testimony of Morning Chaos is released in December 2011 and gets good reviews.

Their demo being released, Morning Chaos is ready to perform a series of gigs in order to earn their recognition on the Belgian metal/rock scene. A few notable live performances can be outlined: the ‘Back’live show’ in Seraing (January 2011), their selection – from the preliminary gigs to the final contest – at the ‘Liege Metal Fest’ (from February to December 2012), the ‘Hard Rock Fest’ in Huy (July 2012), their selection at the ‘Durbuy Rock Fest’ contest (December 2012), the ‘Oug’rock Fest’ (may 2013)… With more than 20 shows in 2 years, Morning Chaos’ music found its identity, coherence and audience. Meanwhile, new compositions, original arrangements and a few covers have enriched the band’s set-list.

In February 2013, the sound engineering student Loïc Magotteaux gives them the opportunity to record their adaptation of Louis Armstrong’s classic What A Wonderful World, at the SAE studio in Brussels. This one-day experience in real studio-conditions is awarded with a good outcome, mixed and masterised by Loïc in March 2013. With an artwork designed by David and Nicolas, the title has mainly been promoted on the web and on social networks.

In October 2013, Morning Chaos records its second EP called Addicted at Polski Studio with Vincent Gomy and Laurent Fontenelle. Released in early March 2014, this new 7 tracks-opus show how much the band has matured.

In March 2015, the band issues its first homemade video clip, an acoustic version of their song “One Last Shot”. At the same time, the 4 musicians progressively adapt part of their repertoire in an acoustic version and start a series of “unplugged” gigs, a formula which underlines the melodic quality of their composition, warmly welcomed by a larger and more diversified audience.

After 4 years within Morning Chaos, Niko leaves the band in April 2015, due to a professional evolution which lowered his availability and involvement. After several auditions, François is chosen as the new rhythm guitar player at the end of June 2015.

With this new asset, the band continues to mature and releases a new EP called “On Your Trail” in April 2016, which demonstrates in 5 tracks their capacity to innovate while being faithful to their stylistic coherence.

Very pleased with this new studio testimony, the band starts its promotion of and has notably the honor to play at the mythical “Spirit of 66”, Verviers, in the frame Fiesta City in August 2016.

In November 2016, the band collaborates with Maïté Brocha to shoot the video clip of their song “Loverlorn”.

2017 was a big year for Morning Choas : 10 dates and the release of the videoclip of Distrumped, a brand new song recorded earlier in the year along with two others.

Another new song was released in the beginning of 2018 : Sticks & Stones. Unfortunately, Da went into a car crash a few days later, which badly injuried his left leg. After two years of surgery and revalidation, the band is back and ready to bring musical chaos again!